The Electric Challenge or Going electric without a home charger 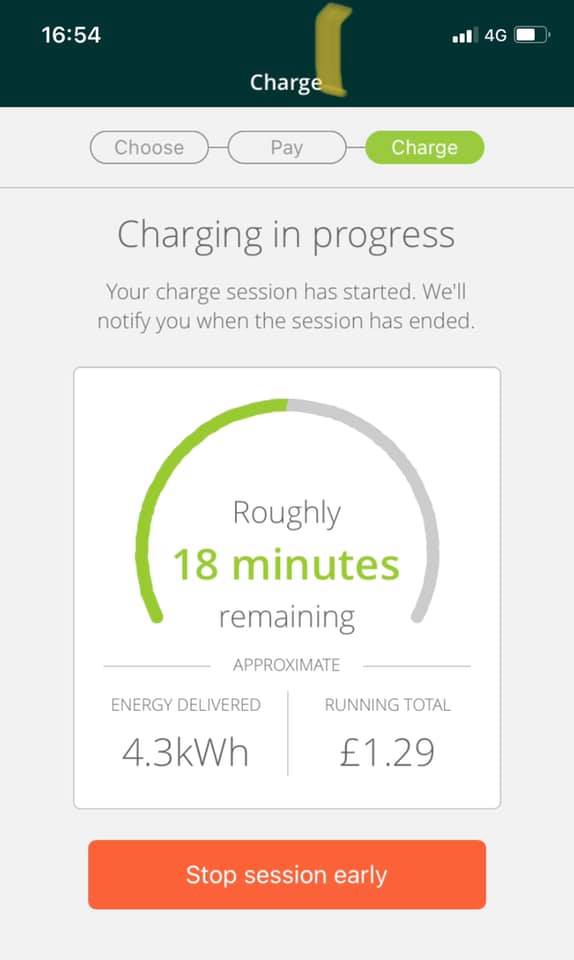 The biggest contributor to the CMC carbon footprint is our company fleet of cars. Prior to lockdown 10 of our cars were diesel and 1 petrol, but gradually over the last year we’ve replaced most of them with hybrid models. Why hybrid and not fully electric you might ask. Well, price is a contributing factor also our staff can cover a high number of miles each day and some of them had concerns regarding being stuck somewhere and not being able to get a charge. So, I decided that I would take on the challenge of seeing whether it was possible to run an electric car easily without having a home charging point.

The first decision was which car to buy. With so many models on the market it was difficult to know which would be the most suitable. Car size, battery size, length of charging time… so many things to consider. So who best to ask than someone who drives a variety of makes of electric cars – a chauffeur! His response, simple, the Volkswagen ID.3. Similar size to the VW Golf, the ID.3 doesn’t differ much in looks either. What it does have that appealed to me is a 77kw battery with a range of 340 miles. Fully charged, this can safely get me to most clients without having to worry about coming to a halt on the M6!

Initially, having an electric car has meant I’ve had to plan journeys slightly different to the norm. Instead of having an app on my phone for company fuel card petrol stations, I now have a number of apps telling me where the nearest charging point is. With Zap Map, after inputting your car information – make, model etc. – it works out your journey route, letting you know if you’ll be able to do the whole journey without charging and if not, where the charging points are and whether or not they’re fast charge. Other apps to use – ChargeFinder, ChargePoint, bp pulse

Secondly, I have to consider how long a charge will take if I need to stop. With Instavolt, a rapid charging network, 20 minutes buys me 160 miles of charge. Just long enough to grab a drink and visit the facilities or make a business call, which is average for most business motorway users whether electric or ICE (internal combustion engine), see I’ve had to learn a whole new language as well!

I hit a problem immediately with not having a home charger; there is no national network set up to charge electric cars. Each company that provides charging points wants you to sign up online to their network and then they issue you with a card. I thought we were supposed to be working smarter and becoming greener, but no, an old fashioned card and that card takes 7-10 days to arrive. I immediately sign up to 6 networks, one must arrive quicker! So how do I get a recharge within that time – go shopping at Tesco or Aldi for a free charge.

I hold my hands up, once I’d got connected to the networks my first experience of charging didn’t go too well. I arrived at the MacDonald’s in South Liverpool (yes, I’ve had to swallow my pride and admit MacDonald’s can be good for something and what’s a trail blazer to do when there’s limited options!), plugged my car into the rapid charge, and MacDonald’s had a massive power cut! All I can say is that Dale Vince, chairman of the first vegan football club in the world, Forest Green Rovers, and the reason I’m sat in an electric car in the first place, would have been proud. The week didn’t get any better either; the sub station at the first charger had set itself on fire, at the second charging point I couldn’t connect to the charger, the third location was out of order and next stop again I couldn’t connect. I gave up! Luckily I wasn’t desperate to charge and on my way home from Manchester that night at 1.05am, I finally got a full charge!

We’ve still a lot to learn about going electric and because electric cars are still relatively new to the roads there’s a lot of miss information, such as what happens if you get stuck in traffic and your car runs out of charge – here’s a link to dispel this myth. As electric drivers we also have to remember that no one can hear us, especially important if you’re driving through a city centre when the bars and clubs close or past schools at 3.30pm!

So far I guess I’m not selling it to you but things have got better and I’m hoping that after this month’s COP26 in Glasgow we’ll see an improvement in the networks as more companies get on the electric band wagon. If you’re considering moving over to electric and don’t want to encounter the pitfalls then watch out for my next blog!

All resources
We use cookies on our website to give you the most relevant experience by remembering your preferences and repeat visits. By clicking “Accept All”, you consent to the use of ALL the cookies. However, you may visit "Cookie Settings" to provide a controlled consent.
Cookie SettingsAccept All
Manage consent

This website uses cookies to improve your experience while you navigate through the website. Out of these, the cookies that are categorized as necessary are stored on your browser as they are essential for the working of basic functionalities of the website. We also use third-party cookies that help us analyze and understand how you use this website. These cookies will be stored in your browser only with your consent. You also have the option to opt-out of these cookies. But opting out of some of these cookies may affect your browsing experience.
Necessary Always Enabled
Necessary cookies are absolutely essential for the website to function properly. These cookies ensure basic functionalities and security features of the website, anonymously.
Functional
Functional cookies help to perform certain functionalities like sharing the content of the website on social media platforms, collect feedbacks, and other third-party features.
Performance
Performance cookies are used to understand and analyze the key performance indexes of the website which helps in delivering a better user experience for the visitors.
Analytics
Analytical cookies are used to understand how visitors interact with the website. These cookies help provide information on metrics the number of visitors, bounce rate, traffic source, etc.
Advertisement
Advertisement cookies are used to provide visitors with relevant ads and marketing campaigns. These cookies track visitors across websites and collect information to provide customized ads.
Others
Other uncategorized cookies are those that are being analyzed and have not been classified into a category as yet.
SAVE & ACCEPT